Chuuk State, with the famous lagoon still referred to as "Truk Lagoon" is located about 590 southeast of Guam and 3372 miles southwest of Hawaii.
Chuuk State consists of 11 mangrove-fringed islands in the Chuuk lagoon, and a series of 14 outlying atolls and low islands surrounding the lagoon. This lagoon is one of the world's largest enclosed lagoons. Enclosed by a 225 km. long barrier reef, the lagoon covers an area of 822 square mi.

Chuuk's lagoon was entered into modern history when the US attacked in February, 1944. Chuuk was being used as the headquarters of the Japanese Imperial Navy’s Fourth Fleet. The attack was a dozen times more powerful than the Japanese attack on Pearl Harbor and continued for 2 days and a night, leaving 100's of wrecked ships, aircraft, tanks, guns and equipment at the bottom of the lagoon and scattered about the islands.

These wrecks, the largest collection of intact wrecks from WWII, are now the major attraction of Chuuk State. Divers can visit many of the wrecks which now lie at the bottom of the very large, but shallow lagoon.

Chuuk people are Micronesians, with their own language, customs and culture. The first westerners to discover Chuuk were Spanish explorers in the 1500's. The Chuukese were skilled navigators and canoe builders using only the stars, moon, waves and wind to get to their destinations. On the outer islands of Pulusuk, Puluwat and Pulap, traditional canoe builders still practice this art of building and navigation.

During the last century, Truk was feared by whalers and missionaries. Known as the "Dreaded Hogoleu" for its fierce warriors and unique fighting skills, westerners bypassed the island before the first missionaries established themselves in Chuuk in the late 1800's.

In the late 1800's American and European traders planted coconut tree plantations to harvest the meat, know as copra. It was used in perfumes, soap and other consumable products. Some copra is still produced and used in local cottage industry. 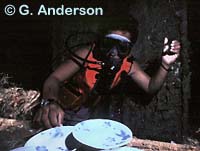 "Operation Hailstorm", launched on the morning of February 16 1944 had nine aircraft carriers and 16 battleships of the U.S. Navy anchored 90 miles off Truk Lagoon. This surprise air raid attack on the Japanese Imperial Navy’s Fourth Fleet was a dozen times more powerful than the Japanese attack on Pearl Harbor. Thirty waves of attack planes hit the more than 60 Japanese naval vessels in the lagoon with constant bombardment for two days and one night.

Truk was important to both sides because of its strategic location of the lagoon in the Caroline Islands. Located just west of the Marshall Islands and just south of Guam the Allies needed Truk to take control of that part of the Central Pacific.

Submarines, fuel tankers and cargo ships were caught and destroyed right in the midst of fueling and maintenance. By the end of the second day, most of the 60 vessels were at the bottom of the lagoon and many more were aground on the reefs. Approximately 250 aircraft were also destroyed.

This ghostly fleet remains mostly intact at the bottom of Truk Lagoon. Ships, the planes, tanks, guns and all sorts of equipment lay preserved in this aquatic grave where only divers can visit.

U.S. citizens do not need a passport for entry to Chuuk, a birth certificate or other proof of citizenship is required. Citizens of other countries must have a valid passport and a return or onward ticket. Tourists are granted a stay of up to 30 days.

Temperatures range between 70°F to 90°F and the average humidity is in the low 80's. Rainfall varies widely throughout the state. Annual rainfall is about 110 inches.

For diving, the water temperature is warm, usually in the low 80°'s. A 2mm or 3mm wetsuit, polartec or at least a protective non-thermal dive skin is recommended depending upon the diver.

Immunizations against cholera and yellow fever are required if the visitor is coming from an infected area. Typhoid, paratyphoid and tetanus shots are strongly recommended.

The U.S. dollar is used in Chuuk. Travelers checks and currency can be changed at banks and at some hotels. The Bank of the FSM and Bank of Guam are full-service banks operating in Weno.